Horse Orchestra is a real melting pot. The band consists of musicians from Norway, Sweden, Denmark and Iceland, and the music is a fusion of traditional jazz, hip hop, noise, baroque and free improvisation – all presented with a fiery rock'n'roll attitude.

The band is a testimony to a new generation in Nordic jazz, which has control over its musical history and at the same time manages to open up the music to a much wider audience.

1920s New Orleans meets free jazz from the 60s with added hip-hop – as well as detours to rock and renaissance music – and creates an original, humorous and postmodern expression that goes far beyond jazz music.

For Horse Orchestra, humor is as important as the instrumental skills and convincing compositions. Thus, the listener witnesses a humorous and joyous musical celebration, which is so contagious that one is happy to be wrapped up in all the group's often extreme-sounding experiments.

The band's first album Living the Dream (2014) won two awards at the Danish Music Awards with the justification:

The band consists of young musicians who have no respect for conventions. They do exactly what they want without making any notice of what other musicians do. They may take on a New Orleans composition from the 1920s at one moment and jazz from Chicago from the 60s in the next and play both styles with equal conviction – while adding a personal and original touch to the music.

The concert is part of :

The Community, COLABS and Knud's Kiosk host a two-day festival from 17 - 18 July filled with experimental music and improvisation.

Imagine two summer nights where the garage door open and you go inside to be enthralled by the experimental sounds in the light of the mirrorball or head outside a enjoy a glass of wine in the sun in between the shows in the small yard in front of COLABS.

Spanning generations, we present some of the most interesting acts from the Aarhus scene combined with artists from the pulsating Copenhagen free jazz scene.

There will be DJs before, after and between the shows and cheap food and beer will be sold. A jazz party awaits.

We believe in the strength of cooperation and the importance of diversity and freedom of expression in music and life.

The Community was founded in 2014 and the core of the association today consists of Nana Pi, Mia Dyberg, Maria Dybbroe, Jonathan Aardestrup, Jan Pranev and Asger Thomsen, based in Berlin, Copenhagen, Fredericia and Aarhus. 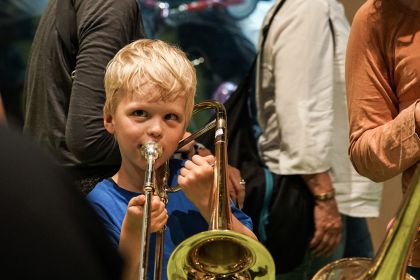